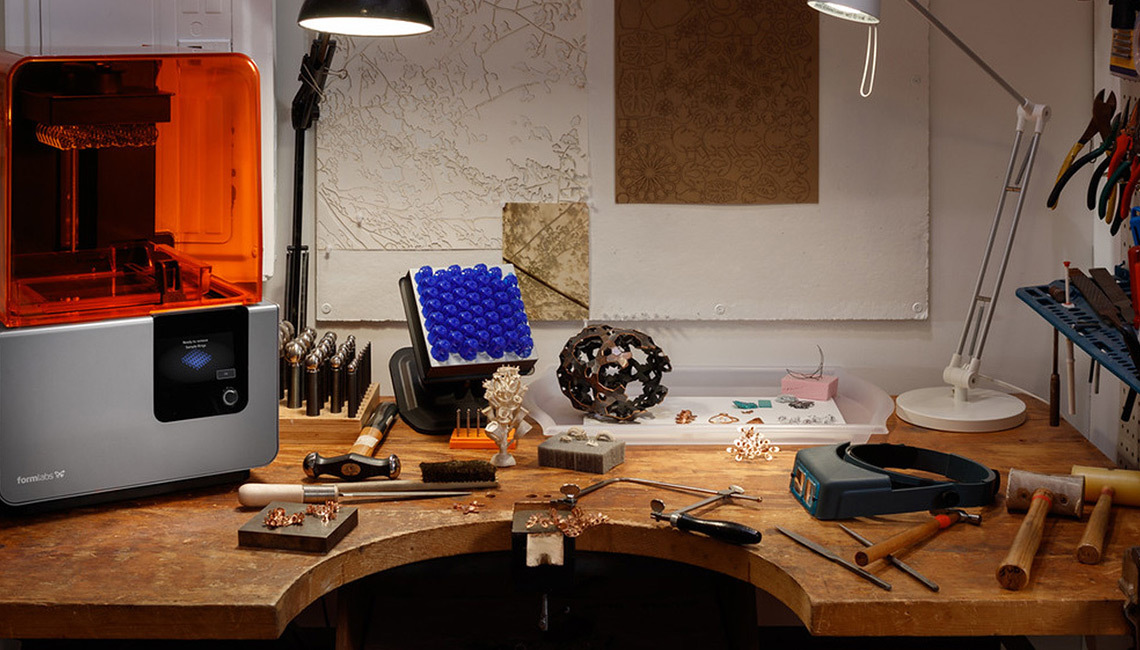 Nothing beats the thrill of actually holding a vehicle or character that you modeled in your hands – yet most guides to 3D printing seem to be aimed at industrial designers, not entertainment artists. It was an issue that Jordan Pelovitz, Education Specialist at Formlabs, aimed to rectify in his talk at Gnomon last weekend: part of the school's free afternoon event 3D Printing Lab: An Introduction for Designers and Artists.

In just 45 minutes, Jordan set out everything you need to know to turn your models into perfect prints, from the different types of 3D printers available to an overview of key modeling technologies. You can watch the entire talk on Gnomon's Livestream channel via the link above. But below, we've distilled Jordan's presentation down into 10 golden rules for entertainment artists aiming to create their first 3D print.

Stereolithography (SLA) and Fused Deposition Modeling (FDM) printers – that is, the kind of 3D printers you're likely to be using at home – can't print surface color. So turn it off in your 3D software.

If you're creating a model from scratch, apply a shader that approximates the look of the resin or thermoplastic your printer will be using to help you get a better idea of how it will print.

If you're preparing an existing asset, see how it looks in an untextured view. Remember that surface detail generated through bump, normal or displacement maps is a render-time effect. If you want it to show up in your 3D print, you'll have to recreate that detail as actual geometry.

3D printers build up prints in a series of thin horizontal layers. Make sure your model is oriented with this in mind.

On an FDM machine, any surface at an angle to the printer's build plate will exhibit a 'stair step' effect when printed, so critical details should be oriented parallel to the plate. On an SLA machine, this is less of an issue, but details may show up more easily if they are oriented with a specific printing axis, as we shall see in the next tip.

If all else fails, you can sand down any rough edges on the print afterwards – but designing a model with 3D printing in mind can save you a lot of hard work.

3. Get the resolution right

Because 3D prints are built up in layers, the horizontal and vertical resolution of your printer may differ. Make sure you use this to your advantage.

If simply adjusting the orientation of your model isn't enough to preserve its fine surface details in print, you'll have to thicken them up in the geometry itself.

In general, it's good practice to bump up the surface detail of a sculpt – particularly hair and wrinkles or creases in clothing – beyond the point to which you would for games or visual effects work.

If you're planning to use your modeling software's measurement tools to check the size of details, remember that its default units may not match those of the printer. Make sure you set up your scene so that the measured height of the model matches the height at which you plan to print it.

The best orientation in which to print your model may not be one in which it balances naturally – in which case, you'll have to create supports for it.

Supports usually consist of a flat base plate and thin vertical 'towers' running to the underside of your model. After printing, the supports can be cut or snapped off.

The software supplied with your printer may be able to generate supports automatically, but if not, you can add them yourself. You may also need to do this if your model has overhanging parts.

6. Make sure the mesh is watertight

For a model to print correctly, the mesh must be manifold. That means that every polygon within it must attach to another polygon along every edge.

As well as visible holes in the surface of a mesh, check for internal faces. This is a particular issue with real-time models that have been created by sinking one mesh object through the surface of another since the interior surface is often not closed to save polygons. The missing faces won't show up when the model is rendered, but they will generate errors when it prints.

You can find a good explanation of how to do this in this Stack Exchange thread. It's written specifically for Blender, but the principles apply to any 3D software.

In addition to making sure the mesh is intact, make sure that none of the faces are reversed. Displaying the normals of the model should help you check that everything is facing outwards.

Making your 3D print hollow on the inside saves both time and materials. In the example above, the hollow sphere prints twice as fast as the solid one, and uses a third of the resin or thermoplastic.

When hollowing out a model, remember that the internal thickness of the walls should be sufficient so that the print won't buckle under its own weight. Creating internal supports can help here.

If you're printing by stereolithography, remember that a hollow model will need a hole at the bottom to allow excess resin to drain away. The same applies if you're using a commercial Selective Laser Sintering (SLS) service like Shapeways or Sculpteo since the sintering powder also needs to drain out.

Desktop 3D printers have a limited maximum build volume. If your model doesn't fit inside that volume, you'll need to split it up into pieces and print them separately.

Hard-surface models often break apart naturally, but if you're printing an organic sculpt, you may have to get more creative: for example, by separating a character's head, torso, and limbs.

The simplest way to do this is to create clean cuts through the source geometry and glue the resulting surfaces together after printing, but Jordan recommends creating actual geometric keys that fit into one another, then gluing those together. A simple peg-and-hole design is usually best, as screw threads don't always print accurately.

Correction: An earlier version of this story recommended using threaded inserts (sometimes known as 'helicoils') to connect parts of a model. Jordan comments: "Screwing parts together and using helicoils is really for when you need to use an actual screw. If you are attaching models together just because they're too big for the build area, I usually don't recommend adding screws: it's a complicated process."

If you need to connect printed parts, make sure you leave some margin for error. In the real world, nothing prints perfectly.

For example, if you're designing 10mm peg-and-hole joints, either make the pegs 9.9mm wide or the holes 10.1mm in diameter – or whatever margin of error your printer requires. The exact numbers will depend on the tolerances of your particular machine, but making both peg and hole 10mm wide is a recipe for disappointment.

Working with tolerances like this is easier in industrial design software than conventional DCC tools, so consider exporting your base mesh to a suitable CAD package: Jordan suggests either OnShape or Autodesk's Fusion 360, both of which are cloud-based. OnShape offers free accounts, while Fusion 360 is free to students.

If you plan to use a CAD package to finish off your model, it's usually best to transfer the file from your 3D modeling software in STEP format.

Whatever software you use for your modeling work, it's best to export the finished model as an STL file. While 3D printers will often accept models in standard DCC file formats, like OBJ, the STL format represents the mesh as a series of triangles rather than quads or n-gons, minimizing 'interpretation errors' when printing.

“If you think of a square, you can divide it into two in two ways, and you don't want that,” points out Jordan. “STLs take the guesswork out of printing.”

CG Stars Head Down Under for Gnomon Live Australia 2017