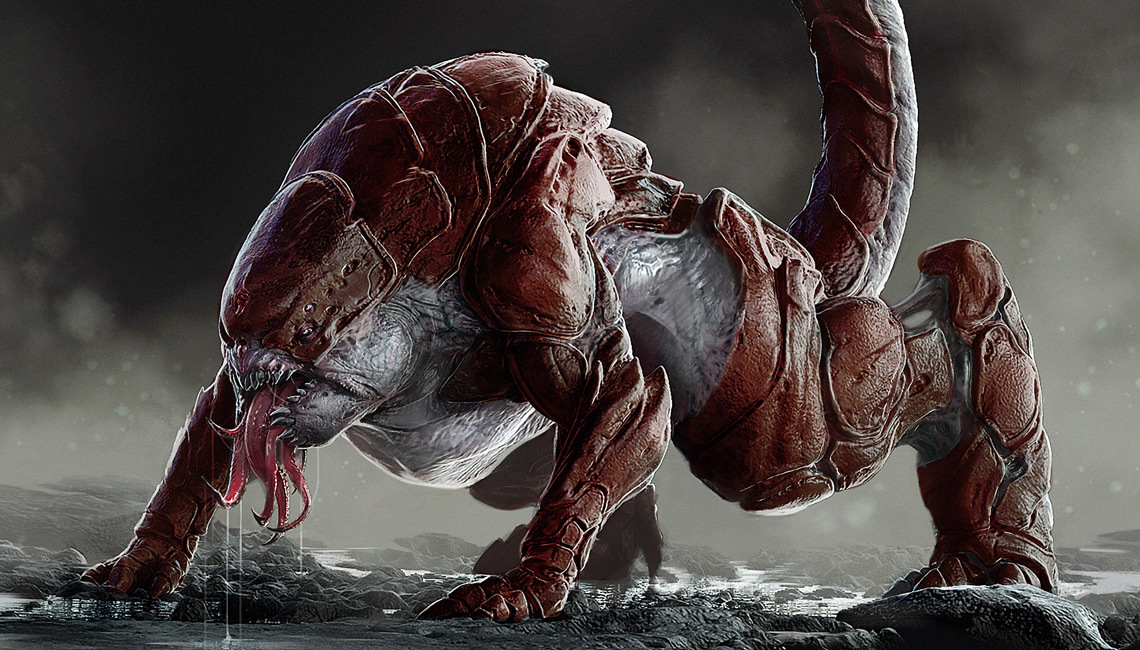 Over the course of his 20-year career, concept artist Jerad Marantz has worked on some of the world’s best-known movies, games and TV series. His resume includes Doctor Strange, Guardians of the Galaxy, Gears of War 4, and no fewer than six seasons of Grimm, for which he designed many of the show’s otherworldly creatures.

In November 2016, Jerad brought all that experience to bear in a fascinating presentation during Gnomon’s free Anatomy Lab event, during which he revealed some of his working methods, and provided his career advice for aspiring creature designers.

You can watch the full recording of the event — which also featured the Natural History Museum of Los Angeles County’s Tim Bovard and The Mill Modeling and Texturing Lead Krystal Sae Eua – on Gnomon’s Livestream channel.

Below, we’ve picked out the highlights from the talk to put together a list of 10 things that every young artist should know before trying to break into creature design.

A well-designed creature, no matter how unearthly, draws inspiration from its earthly counterparts. “Creature design is the combination of familiar elements,” argues Jerad. “You’d think you could do almost anything, but if you do, the creature isn’t relatable.”

This problem — that unless the viewer has a familiar point of reference for a creature, they have no way of deciding whether it is ‘realistic’ — is most acute in visual effects. “When the creature is on screen, it will be interacting with actors, so if it isn’t designed well, it’s going to look like Who Framed Roger Rabbit?” points out Jerad. “Unless you create something unique in an educated way, that shows your understanding of anatomy, of gravity, of all these other factors, [it won’t hold up].”

But if a creature designer is restricted to forms that appear in the real world, they can at least be creative about the way in which they combine them. Good creature designs often take familiar sources and blend them in unfamiliar new ways. Jerad’s own concept for the Pouncer from Microsoft Studios’ Gears of War 4 draws on a most unlikely menagerie of creatures, including scorpions, crabs and pit bull dogs.

2. A lot of the time, you’re working blind

“This industry is actually a lot less organized than people assume,” says Jerad. “One of the misconceptions about working in film or TV is that the script is done and you’re just coming in and illustrating concepts that are already well-described.”

Instead, creature designers are usually brought in during the script-development phase of a movie, and may be hired to clarify not only the look of a creature but its role in the story. With the script consisting of little more than a treatment, the description of the creature itself is often similarly brief, and open-ended.

“I typically get a sentence of description — they want a ‘vampire-werewolf thing’ — and then I start work,” says Jerad.

3. You need to learn to interpret briefs

But even the shortest brief can contain a surprising amount of information, if you only know how to decode it. For the Alien Rock Grubber, a creature design tutorial he recorded for The Gnomon Workshop in 2014, Jerad set himself the fictitious, but typical, brief: ‘The Alien Rock Grubber scavenges for eggs along the jagged terrain.’

“Writers use specific words for a reason, so it becomes the job of the concept artist to dissect the description,” says Jerad. “There’s actually a ton of information in that sentence: he’s alien, there are rocks involved somehow, he’s scavenging — now why use the word scavenge instead of forage? — for eggs. [To us], that’s kind of creepy: he’s scavenging to eat unborn beings. And if he’s navigating through jagged terrain, he’s got to be nimble. All these elements in one sentence inform the design.”

The first step of any creature design project is to collect suitable reference material. “I cannot stress the importance of reference enough,” says Jerad. “The number one mistake that artists — even seasoned professionals — make is jumping straight into an assignment and inventing. Memory is just not that good. I’ve been studying anatomy for 20 years and I still have charts all over my office.”

Before beginning work on a creature, Jerad creates a collage of “every animal that could be referenced” in the design, combining online image searches and material from reference books like Eliot Goldfinger’s Animal Anatomy for Artists. The one thing that he doesn’t include is other artists’ designs.

“I always include real photos and anatomical reference, but I try not to look at concept art because I don’t want to take on another artist’s filter,” he says.

As well as images of animals, Jerad often incorporates clothing, props or people into his reference sheets. “I incorporate people into the collage because I want the audience to have a definite emotional relationship with the creature,” he reveals.

Although the entertainment industry now works digitally, Jerad still advises young artists to begin their training away from the screen, building up traditional art skills before trying to build up software skills.

“Draw every day. Draw on paper: have sketchpads accessible to you at all times,” he says. “Take painting classes before you start messing with Photoshop. You can learn a 3D program in a month or two, but you could spend 10 years learning to draw well.”

6. But that doesn’t mean you can ignore 3D

While traditional skills may still be the foundation of creature design, familiarity with digital sculpting software is now essential for creature designers. Jerad says that he had never tried ZBrush before graduating from college, a little over a decade ago. Now, he uses it every day. “Creature design is such an abstract job that roughing out shapes in 3D is much more efficient for conveying an idea to a client,” he says.

As well as giving clients a better idea of how a creature will look on screen, familiarity with 3D software gives a creature designer more control over their work.

“Before, I would do a drawing and it would be handed to [a 3D] artist to get resolved, and when I was working in practical effects, to another guy who would sculpt a maquette,” says Jerad. “I enjoyed the collaboration, but now I can do both the sketch and the model, turn it in to the client, and they can do whatever they need to get it on screen. Typically, they [just] need to scale the model up, push the details further [and retopologize it] to make sure it’s animation-ready.”

Jerad now typically presents designs to clients as KeyShot renders, sometimes with a small amount of post-production work in Photoshop — “There isn’t a lot of paint-over: once I hit Render, I’m 90% done” — though he says that in some cases, it can be preferable to render turntable animations directly from ZBrush, since the focus is more on anatomical detail than lighting effects. “ZBrush turntables can look a little plastic, but when you’ve sculpted [that detail], you want it all to be revealed,” he says.

Early in the creature design process, Jerad aims to generate five to ten rough sketches a day to send to the client for feedback. The goal at this stage is less to find design elements that work than to rule out ones that don’t.

For this phase of the work, Jerad still prefers to draw traditionally. “I usually work on 8.5 x 11” sheets of paper, then scan the drawings into the computer,” he says. “I love working this way because it enables me not to treat the process too seriously, not to lock up. Back in the day, I would buy these beautiful pristine sketchbooks but it felt like every time I opened the page I had to draw a masterpiece, and that isn’t concept art. Being crude, being fast, you can get a lot of your ideas out very quickly.”

8. The difference between film and games work isn’t image quality

While different sectors of the industry historically had different expectations of concept artists, the difference is no longer the level of visual polish required. “More and more, it depends on the client [rather than the market sector],” says Jerad. “I’ve done video games that feel like movies; where they want the same level of finish.”

Instead, the main difference that concept artists are likely to encounter when moving between industry sectors is turnaround time. Broadcast work tends to be done faster than film or video game work, because project schedules are shorter; and designs for projects involving practical effects tend to be locked down earlier than those using digital effects, where they can be revised right up until a few weeks before release.

The longer schedules afforded by AAA game projects also leads to differences in concept art workflow. “I really like video games because they still expect artists to work in a traditional manner in the beginning,” says Jerad. “There aren’t a lot of games that start in 3D; they actually still want you to sketch.”

9. You won’t have total creative control

While concept art is a creative discipline, you must face the fact that you will be working to someone else’s brief. “Creative freedom is a bit of an illusion,” says Jerad. “As a concept artist, you are being hired to present your solution for what a character should look like, but once you present that solution, you will get notes [for changes].”

This can be a hard lesson to learn. “The reason that people become concept artists is that they believe that their sense of design is good,” Jerad points out. “To spend that much time improving your craft, you have to genuinely believe your ideas are solid. It’s only through the process of working on shows that you discover your place.”

Although you will eventually get to the point where people are asking your opinion, the process takes time. “Creative freedom comes with your relationship with a client, and you have to earn that relationship,” says Jerad. “A lot of people make the mistake of thinking that because they’ve gone through school and have a great portfolio, they’re going to be asked to design stuff [right away], and it doesn’t work like that.”

While demand for concept art has increased hugely since the turn of the millennium, so has the number of aspiring concept artists. “For anyone wanting to become a concept artist, good isn’t good enough,” says Jerad. “There is tons of ‘good’ out there. No matter how great an artist you are, it would be foolish to feel irreplaceable.”

To stand out from the crowd, you need to be both good and unusual – and for that, you need to be prepared to do your research in unexpected places. “Try to find references that haven’t been used before,” advises Jerad. “There are still quite a few of them – it doesn’t just have to be animals. There are all types of weird plant life.”

Above all, draw your inspiration from nature, not from gallery websites. “So many artists are now only influenced by other artists, whereas in the past, you had more original voices,” says Jerad. “Everyone starts out as a fan, but if you want originality, or the illusion or originality, put down the concept art books and draw from life.”

Behind the Scenes of Gnomon Live: Two cities, two weekends