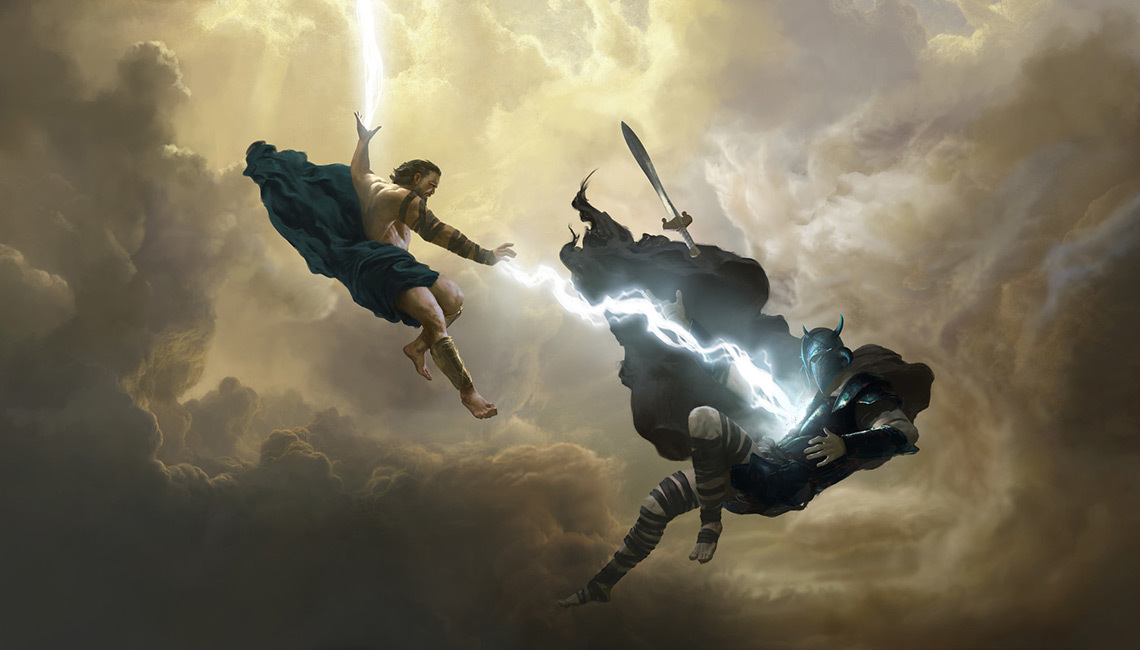 Houston Sharp helped realize a very specific look for the paintings featured in the hit movie, Wonder Woman. Learn about his process at the event on July 13, 7:30 PM

Houston Sharp was picked up by Aaron Sims Creative (ASC) around a year ago, while he was working at a movie poster and advertising company in Los Angeles. Now at ASC, he gets to do a little bit of everything: character design, creature design, environment design, and keyframe illustration. “I take key moments in a script and illustrate them to show directors/writers/producers/investors what those scenes will look like after they've been filmed and put through VFX,” Houston explains about his keyframe illustration work. “So it's characters interacting within a location, with lighting, mood, and composition all figured out. Storytelling, essentially.”


We talk to Houston Sharp ahead of the ‘Illustrating the History of Wonder Woman: Digital Painting with ASC's Houston Sharp’ event on Thursday, July 13th, 2017, 7:30 pm – 9:30 pm. Find out more about the talented concept artist and illustrator, and what attendees can expect from the upcoming event.


Learn more about the Illustrating the History of Wonder Woman event: RSVP or follow on Livestream


Can you talk a little about ASC: What are you working on right now and what is a day-in-the-life at ASC like for a concept artist at the studio?

Current and recent projects at ASC include the new X-Men: Dark Phoenix and Tomb Raider movies, as well as some internal projects and unannounced films. ASC is a very laid-back company; it’s a small studio with a handful of artists, each passionate about what they do, so it's easy to stay motivated and put in some serious work. Which is good, because the number of projects coming in can sometimes be daunting. It's very common for us to be working on multiple films and TV shows at once – sometimes in the same workday.

You’ll be talking about the amazing animated mural featured in the Wonder Woman movie. Can you briefly explain your role on this and tease us with a little info about what you’ll be discussing at the event?

I was tasked with leading the History Painting for Wonder Woman (Art Director, Lead Artist). I had to make sure it got done on time, with a look that Patty (Director) was happy with – all while managing the team of artists I put together to maintain consistency in the work.

You’ll also be walking us through your digital painting workflow at the upcoming event. What are the tools you’ll be using and can you give us any insight into what you’ll be showcasing?

For the live demo, I will be using Photoshop to create a character-centric illustration. I will be using an approach similar to the way I executed the Wonder Woman paintings. There are different approaches I use in my day-to-day work at ASC – which I will briefly go over in the demo as well – but using the Wonder Woman approach seems most appropriate given the topic of the event. I will be demoing an ASC ad I recently painted for the company.

You use ZBrush and Modo, too. How important is it, in your opinion, for concept artists and illustrators to be experienced with 3D programs?

I suppose it's not 100-percent essential if you're a skilled draftsman or painter – for my job, at least – but it is incredibly useful! It's often faster to sketch or indicate with paint than it would be to build and render a 3D model. But there are times when using 3D as a base saves you from having to plan a complex image; for example, if there are a lot of objects in a scene or the scene has a lot of perspective foreshortening or a weird camera angle, blocking out the scene can save a ton of time. Using a ZBrush sculpt as a maquette to test out lighting scenarios on a character or creature is another useful method of using 3D for illustration work.

Let’s talk about your foundations: In your opinion, what are the key traditional skills that aspiring digital artists should master before they even touch a graphics tablet?

There's a lot to learn from the restraints of traditional painting. In digital, there are so many options and functions that it's easy to create work that looks "all over the place," because there are virtually no boundaries; you're going at it one step at a time, seeing what works along the way. When painting traditionally, you have limited colors, and you need a method or plan of execution – since paint interacts with paint a certain way, it will dry eventually, and so on. So, it forces you to think ten steps ahead. That foresight is the greatest thing I’ve gained from traditional practice. In addition to that, the basics of composition, color theory, and values are also incredibly important!

It's surprising to me when concept artists seem to rely heavily on using photos and 3D models and neglect their drawing ability. This makes it near impossible for them to quickly sketch ideas to communicate to a client. What should only take a couple of minutes, takes hours. Even if you're primarily a 3D concept artist, keeping up your sketching habits is vital!

Can you share with us an insight into your sketchbook: where does it travel with you and how frequently do you try to sketch? What are some of your favorite places in LA for sketching from life?

I don't sketch as often as I would like – or should. Sometimes going to a local coffee shop is a nice place to relax and make people uncomfortable by drawing them. Everyone there is mostly stationary, so they make decent models. Going to a life drawing workshop – nude, if possible – is far more valuable, however. To build my mental reference library, going to museums is great, and I enjoy browsing through Pinterest and other similar sites – as well as photos I have collected over the years – and sketching whatever I find that I think is cool or interesting. Studying and absorbing is just as important as creating original stuff.

You like “dark, evil, scary things.” Tell us a little about your love for dark-and-scary subject matter and how it inspires you creatively?

Dark, scary things generally leave more of an impact on people than regular, or even nice things. It's human nature; a survival mechanism, probably. There's power in that that I find fascinating. Scary things naturally grip people, whether those people like scary things or not. This may just be me, but when I see or experience something evil, my mind races; I speculate more; I brace for an impact that may never come; I’m sucked in.

In my own work – even if it's not a particularly scary piece – if I can inject something that evokes that same mental grip into a viewer, then I know my work will impact them, like how a nightmare lingers in the mind after waking up.

You like to write stories, play music, and even design games in your spare time. How important is it, in your opinion, for artists to have other creative avenues such as these?

I don't know how much I can speak for other creatives, but if I do only one thing, I get burned out. It took me a while to realize that when this happened, my creative energy wasn't gone – I was just getting bored with the thing I was doing. So, I started redirecting my creative energy into other creative avenues to keep the ball rolling. In fact, I introduced myself to sculpting and 3D modeling because I became burned out with painting a few years ago.

As different as those avenues may seem – writing stories, playing music, designing games – they all have the same basic creative roots as, say, painting or sculpting: rhythm, texture, tone, key, pacing, composition, balance. These principles apply to all the creative avenues I mentioned above, which makes them accessible to painters or sculptors, but are new enough to present a stimulating challenge — which is what artists thrive on, right?

You supplemented your college education by hiring other mentors to help you reach your desired level. Can you elaborate on these extracurricular studies – what were the areas you wanted to focus on further outside of what you were studying in college?

I wanted to learn how to be the next Iain McCaig, Justin Sweet, or Craig Mullins. So, I hired teachers like designer Michael Scheffe and working concept artists that I looked up to, like Jaime Jones, to learn design principles and other things that are necessary for concept art.

You grew up in California. How much did California – and Los Angeles in particular – help inspire you to follow a career creating art for entertainment? Can you remember what it was that first inspired you to take the path, and can you speak a little about the journey you’ve followed to make the dream a reality?

Growing up in California allowed me the luxury of not having to move very far to be a part of this industry. The town I grew up in was pretty isolated, and I didn't get exposed to concept art until I was almost done with high school. I remember discovering ImagineFX magazine and speed painting videos on YouTube; those were the first things that exposed me to concept art and illustration. From there, I bought my first Wacom tablet and locked myself in my room to paint and experiment all day.

And how about future dreams: What do you aspire to do in the future?

Short-term goals: I want to be more heavily involved with the look of a movie or game; I want the entire project to have my fingerprint, instead of just helping with a few scenes or a character or two. Regarding long-term goals: I want to see stories I’ve written and created the look for brought to life on the big screen by major studios.