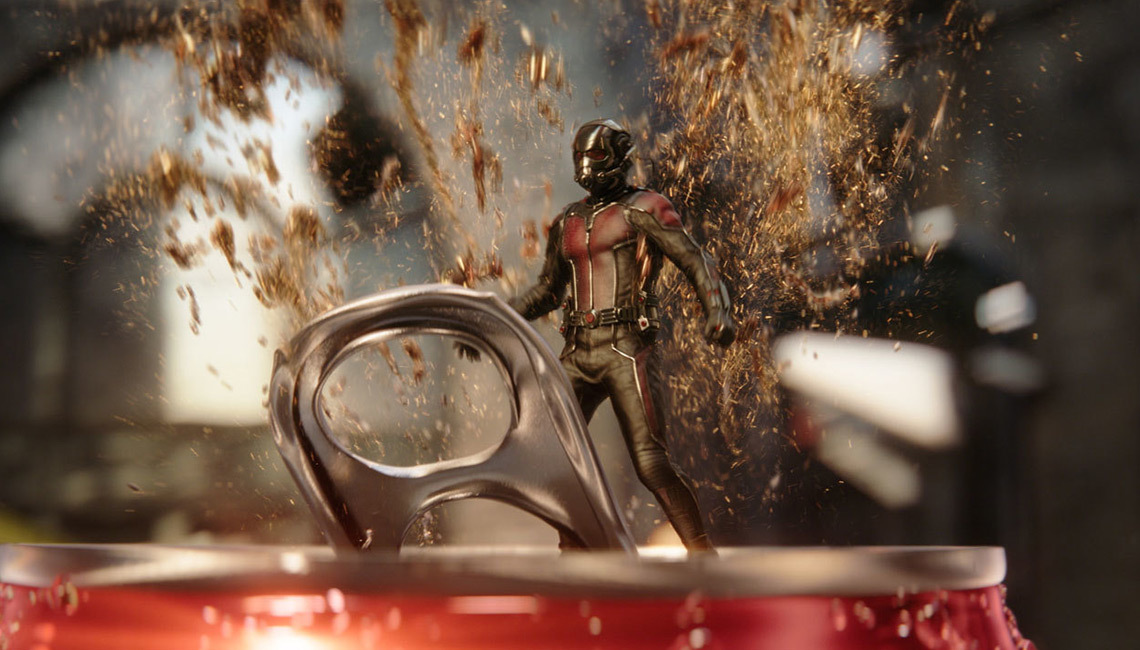 Luma Pictures specializes in creating unlikely superheroes. The top international visual effects facility's recent work includes a string of movies featuring characters with everyday problems but extraordinary powers, including Ant-Man, Deadpool and Guardians of the Galaxy. Its career tips for young VFX artists are no less unexpected – but also no less effective.

At An Evening With Luma Pictures, its fascinating recent Gnomon talk, four senior staff from the studio – Vice President and VFX Supervisor Vince Cirelli, 2D Supervisor Alex Cancado, Character Supervisor Mathieu Aerni and CG Supervisor Oded Raz – set out to bust some of the key myths about the CG industry, and to provide young artists with the information they really need to get a job in visual effects. Below, you can read five of the key tips from their presentation.

1. Big studios have the same problems you do

It's tempting to think that when you get your first job at a studio, all your problems will be solved. VFX companies have huge render farms, amazing in-house tools, and teams of specialist artists. That must make creating visual effects a breeze, right?

“People think that if they were working in a big studio with a big render farm they would have no problem rendering things on time,” he says. “That's not true. Even with hundreds or thousands of machines, we still have to optimize scenes.”

Then there's the question of tools. While it's true that big VFX houses have proprietary tools that you don't have access to as a student, they don't usually do things that commercial tools *can't* do: they just do the same things faster, or they do them on a larger scale. Even in the rare cases where in-house software performs a completely unique task, it doesn't do so unaided.

“Our tools, amazing as they may be – and they are amazing – don't create the beautiful art,” points out Oded Raz. “Our artists do.”

But as talented as those artists may be, they aren't superhuman. “Just because we're doing blockbuster work, it doesn't mean we aren't making mistakes,” says Vince Cirelli. “We're figuring things out all the time.”

If that sounds depressing, it shouldn't. Working on a Hollywood movie isn't qualitatively different to working on a student project: it's just the same thing, done on a bigger scale. Which means that you can start putting the skills that you'll need to survive in the industry into practice right now.

2. You should try to fail as fast as possible

Creating visual effects isn't about delivering a perfect shot first time: it's about working with the client to determine what constitutes that perfect shot – and that means sending them an awful lot of imperfect shots first.

“The biggest myth [among non-VFX artists] is that when we work on movies we get to deliver the entire movie at the end,” says Oded Raz. “Instead, we do a lot of quick renders so we can [get client feedback and] do iterations on them.”

Sending over shots early in development enables a VFX facility to get a feel for what a client likes – and crucially, what they don't: a process Luma describes as doing your failing as early as possible.

“I don't believe in coveting things and holding on to them until we think we're perfect,” says Vince Cirelli. “It's why we're able to execute complex jobs quickly.”

In order to assemble complete shots early in production, visual effects companies use proxy assets – rough versions of models, effects or lighting – rather than waiting for the final versions to become available: a workflow that can equally well be applied to student projects.

“Don't compartmentalize your work. Run it right through to the end,” says Cirelli. “It doesn't matter if it's super-rough. First renders always look horrible, whether you're at home or in a studio.”

While starting work on the lighting and effects before you've completed modeling and texturing may seem counter-intuitive, being able to see everything in context, even in a rough form, stops you from wasting time on things that will never be seen in the final shot.

“As artists, we get focused on details. We could easily spend three days on a character's armpit,” points out Mathieu Aerni. “That's why it's important to send [a client or supervisor] a first draft after a couple of days so you can work out where you really need to spend the time.”

3. Cheat whenever you can get away with it

The philosophy of focusing on what looks believable rather than what is technically perfect doesn't just apply to the fine details of models: it can be extended to every aspect of your workflow.

“You need to be cheating as a student – and I mean that in the best way possible,” says Vince Cirelli. “People only care about the pixels you see on the screen.”

One common example of such a 'cheat' is the use of low-res geometry – or even simple 2D cards – onto which photographic textures can be projected for the background of a shot, instead of modeling and texturing a detailed 3D environment.

“I use cards all the time,” says Cirelli. “There's nothing better than photos if you're trying to do photoreal, right?”

The same approach can be taken with FX shots, substituting footage that has been shot practically for digital effects. Often, that means using photographic fire or smoke elements from stock libraries, but it's possible to get more creative: for a shot from Fright Night of a vampire's skin dissolving after being hit with holy water, Alex Cancado took iPhone footage of corn syrup bubbling in a frying pan and mapped it onto the character model as a texture.

“99% of the time, the only person who will notice [that you haven't created an effect digitally] is your VFX supervisor, and if you can make him like it, you're good,” he points out.

Another 'cheat' is to use geometry-based methods like blendshapes or corrective morphs in place of time-consuming muscle or cloth simulations – a technique Luma recently adopted on Ant-Man.

Rather than simulate the way in which Ant-Man's suit wrinkled as he moved, the studio developed a system in which the motion of the outer joints of the character's limbs automatically called up generic deformations from a library sculpted by one of Luma's character artists.

While such an approach would be difficult to pull off for loose-fitting clothing, for a form-fitting outfit like Ant-Man's, it looked fine. “Thank God superheroes wear tight suits!” jokes Vince Cirelli.

4. You need to learn to 'eat elephants'

Movie effects can look so complex, it's impossible to imagine yourself producing anything similar. Don't be intimidated. VFX companies don't have superpowers you don't: they just have more staff.

Vince Cirelli likens this process to eating an elephant: by breaking it down into bite-sized chunks, it becomes possible for a team of people to tackle what initially appears to be an impossibly big task.

“We do really complex work – every visual effects company does – but it's broken into layers,” he says. “Each one needs to be as simple as possible, then the complexity comes through the layering.”

As an example, Cirelli points to the shot in Ant-Man in which the hero runs through a model city, dodging bullet shots. Rather than creating one huge simulation for the debris and trying to make it match the motion of the digital character, Luma built a set of smaller generic simulations and gave them to its animators to integrate while they were creating the character animations.

For another shot, in which Ant-Man infiltrates a building by surfing through a water pipe on a raft made of ants, Luma created an underlying dynamic mesh for the raft, with ants attached on top. Rather than having to reproduce the motion of each individual insect perfectly, the simulation then became about generating believable clustering, and motion only where motion would be visible.

“There are probably lots of bad things happening in that shot, lots of intersections [between ants], but you don't see them,” says Cirelli. “I'd never let anything out of the facility that looked like it actually was intersecting. It's all about getting the maximum result for the least amount of effort.”

5. The way to get ahead is to be interested in jobs you don't do

Students are often advised to focus their demo reels on specific skill sets. It's better to show potential employers one thing you're really good at than many things at which you're mediocre. But focusing on your strengths doesn't mean that you should ignore what other people are doing.

“We urge people not to preclude themselves from different disciplines when they're starting out,” says Vince Cirelli. “Having background knowledge helps you progress very quickly in your career.”

That's particularly important at a studio like Luma Pictures, in which most artists are to some degree generalists: the company merged its lighting and compositing teams around five years ago, to give artists more ownership of shots, and is now doing the same thing for rigging and animation.

However, even at a studio with a more conventional hierarchical structure, it helps to understand every part of the production pipeline, even jobs you will never do yourself – particularly if you hope to become senior enough to supervise other people.

“Most of the people I know who were aware of everything around not only got really good at their own jobs, but they became department leads,” says Alex Cancado.

Vince Cirelli agrees. “Supervisors who can't execute get smelled out very quickly,” he says. “[You don't need to be able to do your colleagues' jobs as well as them] because they're experts, but you need to have experienced what they're experiencing to some level.”