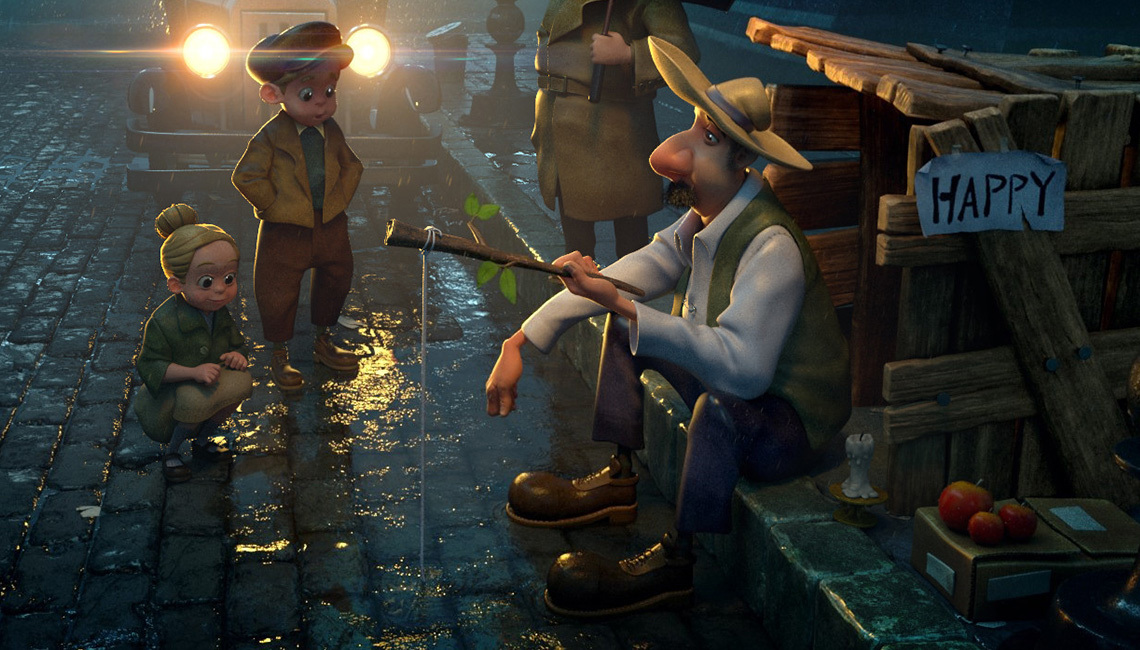 Gnomon's Best of Term awards honor the best new student work created at the school. See all of our amazing Spring 2016 award-winners here.

The over-optimistic fisherman is, of course, the one you see at the top of this story. Allan Bernardo's still render Fishing for Happiness won him the Environment Exterior – 3D category and carried off the overall Grand Prize. As well as its warmth and humor, the image reflects Allan's attention to detail in recreating the fisherman's surroundings, from the puddles in the road and the raindrops on the windows to the way the beam of the car's headlights scatters in the wet air.


Allan says that the image, which is based on a concept by Seongmin Park, took him over four weeks to complete. “It is very challenging to do multiple characters in a full environment but it was definitely fun,” he adds.


As well as the Grand Prize, Allan also carried off the award for Environment Interior – 3D with another lovingly detailed render, Mr. Gatsby's Library: a faithful 3D recreation of a concept by Reel FX look development artist Cathleen McAllister.

Over-optimism of a more potentially fatal sort features in the winning render from the Lighting category. Jeremy Ramirez's Morning Watering (above) shows a fish-man whose dedication to plant care seems likely to cost him his own life.


The memorably surreal image is based on a painting by Ubisoft Toronto concept artist Nacho Yagüe. “I really loved the original, so I thought I would give it a go at 3D!” says Jeremy. You can see a clay-shaded version in Jeremy's ArtStation gallery.


Over-optimism also seems likely to prove fatal in the Creature – 3D category, where Matt Millard's winning render, Leviathan, shows a man facing down a gigantic eel. The image, which is based on a spitpaint by Denis Loebner, was modeled in Maya and ZBrush, textured in Mudbox, rendered in V-Ray and composited in Nuke.

Matt also won the Texturing and Shading prize with his image Havoc and Mayhem, which is based on a concept by Israel-based artist Ariel Perez.

Other highlights of the Spring 2016 term include Stephen Cunnane's winning entry in the Character Animation category (above), which shows two construction robots playing basketball. Stephen – himself a Grand Prize-winner in the previous term – created the VFX clip using PFTrack, Maya, Substance Painter, V-Ray and NUKE.


Then there was Caroline Ng's skeletal, two-faced, four-armed Thanatos, winner of the Character – 3D category, and Engine Driver, Daniel Zeni's masterly study of a figure within an environment, which carried off the Look Development prize.


The Hard Surface Modeling category was split between Akin Adekile, for his models of a skeletal suit of armor and a futuristic laser rifle, and Patrick Yeung for his model of a Lamborghini Veneno; while Donna Urdinov won the Sculpture category with a clay bust of David Bowie as an alien shaman, wearing a headdress inspired by “horned beetles, different types of caterpillars and Balinese dance wear”.

Jevgenijs Scigolevs carried off the Character – Games award for the second term running with the figure above, while Leyla Demirpolat won its counterpart, Environment – Games, with French Pavilion, a real-time environment created in Maya, ZBrush and the Substance tools, and running in Unreal Engine 4.

Matt Ribeiro also won his second Best of Term award running in the Matte Painting category for this Snow Base scene, while William Bao won the final award, for Character Design, with a concept sketch of a futuristic whaling harpooner.


Congratulations to all of the winners. Given that several of them already have studio internships – and that three of the artists selected for last year's Best of Term awards went on to win at The Rookies, the leading international prizes formerly known as the CG Student Awards – we're sure that you'll be seeing a lot of their work in future.