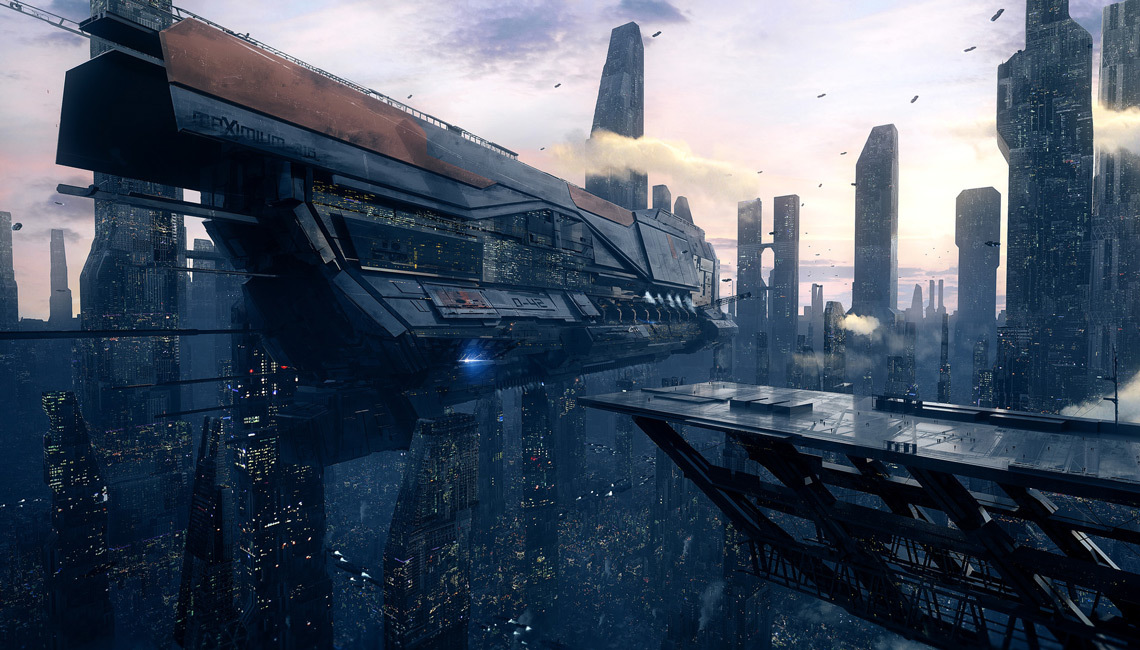 Malcolm Moseley's amazing digital matte painting, created just one year into his studies at Gnomon, won the Grand Prize at the Best of Term awards for Fall 2016.

Two students in their first year of studies have carried off prizes at Gnomon’s prestigious Best of Term awards for Fall 2016 — including the overall Grand Prize. Former computer programmer Malcolm Moseley took the top award for his amazing matte painting Construction Ordinance 316 created in his fourth term, while Suyang Wang’s hard-surface modeling skills landed him two separate awards in his first term at the school.

The Fall 2016 term’s overall Grand Prize went to Malcolm ‘Max’ Moseley for Construction Ordinance 316, his ultra-detailed matte painting of a futuristic cityscape, shown at the top of the story. You can see two other variants of the image in Malcolm’s ArtStation gallery. Before enrolling at Gnomon, he studied computer programming at Austin Community College, but says that he has been interested in films and games ever since watching the original Lord of the Rings movies.

“I’ve always been interested in telling a story, whether it be [through] acting, audio, or images,” Malcolm says. “I love to [provide a] stimulus through visual art and effects, and to leave viewers with a sense of goose bumps.”

Suyang Wang is a promising modeler in his first year at Gnomon. After interning in the Beijing office of game developer Kabam, Suyang relocated to LA to study the full-time vocational program at Gnomon.

Created for the mid-term assignment of the Introduction to 3D with Maya course, his detailed recreation of a subway tunnel won the Environment Interior — 3D category, while Hover Car Garage, a 3D realization of a concept image by Alejandro Burdisio, won the Hard-Surface Modeling category. Suyang says that the scene took him over 100 hours to model and 50 to texture: attention to detail recognized by the award.

Another Fall 2016 success story is Alexandra Reeves, winner of the Vehicle Design category, and a self-taught artist before enrolling at Gnomon. “I started early as a kid, and knew exactly what I wanted to do with my life … but the only experience I [had was] years of being self-taught in traditional and digital media,” she says.

Patrick Yeung, himself a former Best of Term winner for his vehicle modeling, won the Environment — Games category for Vineyard, a wine cellar environment created in Maya and Unreal Engine, and optimized for low-end machines. Patrick also has some great character work in his ArtStation gallery, which is worth checking out.

The Effects — Games awards went to recent graduate Nathan Huang, now working at VR firm Survios, for a set of detailed sci-fi weapon effects created in Unreal Engine. You can see them at the end of the demo reel above.

Álvaro Zabala won the award for Character Design for his digital reworking of Frankenstein’s monster, created in ZBrush and Photoshop, “I´m a big fan of make-up FX and classic monsters, so for this horror-themed design, I chose Frankie,” he says.

Odysseas McCammon employed a more traditional workflow for his clay sculpt TribalPunk Character Bust, which won the Sculpture category. You can see a sequence of images showing how the character — a response to a brief to create a ‘rebel reptile’ – was created in Odysseas’s ArtStation gallery.

Thibaud Fond won the prize for Character — 3D for Old Lady, an amazingly detailed design “inspired by a lady from Walmart”. The character was sculpted in ZBrush and Mudbox and textured in Mari. The fur around the collar was created using Maya’s XGen system, and the image rendered in V-Ray.

The Texturing and Shading award went to Aviral Agarwal for The Last Headhunters, “an homage to one of the most incredible tribes of Nagaland, India”: a ZBrush sculpt resurfaced in Maya, and textured in Mari, with rendering and look dev in Arnold.

Related awards went to Calvin Lo for his Creature Design work; to Misae Kawai for Creature Animation for her fake documentary footage of a spider creature inspired by Netflix horror series Stranger Things; and to Caroline Ng — a previous Best of Term winner now interning at Blur Studio — for 3D Illustration.

The Effects — Live Action award went to Bryan Gonzales for Dead Space-inspired effects shot Apocalypse Destruction, which shows a collapsing building and smoke simulated in Houdini. Other effects were created in Maya, and the shot was tracked in PFTrack and composited in Nuke.

Last, but not least, Yu Wei Chiang took home the Compositing award for his shot of a crashing X-Wing, based on a model from Video Copilot, with destruction and fluid simulations carried out in Houdini and Maya and composited in Nuke.

Congratulations to all the Best of Term winners: collectively, they have produced some amazing images, and proven once again just what incredible work is possible to create — even within months of starting your training at Gnomon.

Do you dream of studying at Gnomon?

While the artwork shown here is truly impressive, remember that every artist has to start their path somewhere. Gnomon’s Admissions Advisors are here to help guide you through the process. Find out about the portfolio guidelines for full-time programs, and learn about Gnomon’s 10-week individual campus and online courses (no portfolio required for individual courses).

Gnomon Student and Alumni Finalists at The Rookies